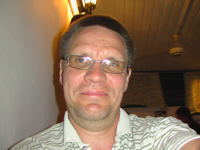 1978-1982, 1985 Food store assistant , Konsumhallen (Coop), Arvidsjaur (summer/vacation job): I did all usual doings in a food store . Put price tag on the goods, cashier, to be in charge for a department during holidays and to order dairy products and vegetables. So I have tried most of the department in a food store like butchery, dairy, hardware and so on.
1981-1982 Railroad worker SJ (Swedish National Railroad Association), Arvidsjaur: It was a job in the AMS-programme. A programme to help unemployed people. I repaired and maintained railroad tracks and remove snow and ice from the shunts.
1984, first six months Night porter, Hotel Laponia, Arvidsjaur: The doings was to answer the phone, computer work, check in and out guests and to solve upcoming problems that could come for a guest.
1984, last six months Food store assistant Odenhallen, Stockholm The first time the doings was to pack up and price tag goods and to be a cashier. After some weeks I got in charge for the vegetable department. And the doings in that was also to order fruit and vegetables Sysslorna bestod i början av att märka upp varor och sitta i kassan.
1985-1986 K4, military restaurant, Arvidsjaur This was also a type of AMS-work. A programme to help unemployed people to have work six months/one year. I did all of the doings in a big kitchen for 800 guests. That included dish washing, cooking, cleaning and also party arrangements.
1986 Education for working in big kitchen restaurants, AMS-centre (Centre for unemployed people), Bergsviken outside Piteå One half year education in cooking, serving, laying tables and hygiene. Both practic and theory.
1987, firts six months, the Care Centre, Arvidsjaur One half year temporary work in the kitchen of the Care Centre in Arvidsjaur with usual doings in a hospital kitchen. I mostly packed the food wagons for the departments, but also some cold-buffet work, dish washing and cleaning.
1987-1997 K4, military restaurant, Arvidsjaur The job was temporary for ten years! I tried to get it steady, but sorry not to make that. The doings was to work as a kitchen assistant with doings like serving, dish washing, cleaning, party arangements and laying the tables. Also I helped the chefs with cooking and doing cold-buffet work. Also I answered the phone and solved askings and ordered dairy products.

I likes to do various things. Like tecnhical issues and I have built my computer myself. Besides computers I like to videofilm and to keep in shape. That includes biking, playing tennis and swimming. I am very interested in science. Travelling abroad for relaxing, seeing famous building and feel foreign cultures makes my soul rich. I travel abroad at least once a year. Cooking food is also something I'm interested in. On the TV I like to watch NHL-hockey, Formula 1 and the Discovery channel. Music is also fun and there I write some texts at first hand and also I have wrote some music. Sometimes friends helping me with the music writing.

At education/spare time I have for instance worked in: